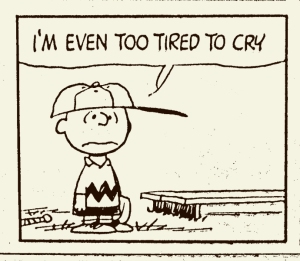 I kept a diary of the symptoms I was suffering over the months and it feels like the fatigue is worse now.

Most of my symptoms have been swollen and numb hands, pain in my fingers and the tops of my feet, aches in my back and pins and needles.

I was tired but I wasn’t sleeping well so I thought those were related.  The last time I noted pins and needles was 2 Fridays ago, thankfully they have gone because they really were the pits!  I called them ‘needles and needles’ because it felt like you were being stabbed randomly by large needles, never knowing where or when the jab would come.  The rheumatologist said ‘oh yes, some people report that.  We don’t know why’.  As you might have worked out, that doctor didn’t help much, except to supposedly rule out auto-immune concerns although I remain unconvinced of his current knowledge.  When I asked him to comment on diets to aid recovery, he snorted and told me if something made me feel bad to not eat it again.

Could the anti-inflammatories be causing this tiredness?  Only way to find out would be to lower the dosage but that was a disaster when I tried it a few weeks ago.  I went cold turkey which was stupid, but I think I was having trouble accepting reality and blindly hoped that I’d be fine without them.

Today after a 7 hour sleep last night, I napped from 10:30-1!  This seems extreme and mostly I’m unable to even fit this into my life as when I’m not working, 95% of the rest of the time with my 3 yr old – neither of which situations are conducive to 2&1/2 hr naps.  It’s 7pm now and I’m tired again already.  I do have a sore throat, more than normal.  I really hope there is something else affecting me today because I struggle to contemplate a life continuing on like this.

3 thoughts on “This makes no sense…”