This actually wasn’t a pre-prepared plan by the way, just something that seems to be developing!  I went to the chemist yesterday and got some advice.

Sunday night I ate a chicken burger and had a glass of white wine.  From the first mouthful it made me feel sick, the wine turned acidic in my stomach and the burger felt like it sat in one clump.  Anyone who has gone through a de-tox and eaten a bad food that used to give you comfort will know the great feeling you get when you eat it again and realise you don’t want it, except of course, if you were eating it to receive comfort.  After a bad night’s sleep full of sweaty nightmares, the next day was dreadful.  I had to lie down after only a few hours of being up because I thought I might not be able to keep holding my head up.  It actually hurt at first to lie down.  My daughter was in the lounge on the iPad,  calling out occasionally ‘Mummy! Mum!’  I answered but for a little while didn’t want to get up.  Eventually I did because the guilt gets to you – I was only there for 15 minutes just enough to recharge a little.

My aunty came to help in the arvo for a bit and the day ended better.  When I became consumed with the choice about work, I stopped researching Parvo information online, because doing both was too much for my little mind to cope with at once and was dragging me down.  But last night I felt compelled to search new terms, looking for new advice and I actually found a site devoted completely to recovery from Parvovirus.  Although there hasn’t been any posts in a few months, I joined to follow them and found some information that claimed fatigue induced by Parvo may have a much better recovery outcome than some of the other viruses.  It made me rethink the diagnoses of post-viral fatigue in favour of saying Parvovirus.  As I’ve mentioned before Ross River Virus has a recognisable and understandable pattern that people accept is the ‘virus’ and not ‘just fatigue’.  But as I talked about the other day, does it matter what we call it?  I’m starting to think maybe it does, when you’re not only dealing with your own illness but other people’s prejudices at the same time.  When you’ve had a cold, how many times has it been exactly like the one before?  Same duration, same symptoms, same recovery?  Never.

I spent quite a bit of time online last night, and I was excited to read more stories of recoveries.  I worried that if I didn’t put down the iPad and rest I would have another bad morning like yesterday, so eventually at 10:30 I did, but this morning so far I feel ok.
So yesterday, I bought some multivitamins and a chinese tonic called Adrenalift.  I feel apprehensive that they will deliver the results they claim to but I am certainly willing to try.  Along with a triple berry/LSA smoothy this morning from my newly purchased Blitz2go (thanks Sandra!) I will try some changes in diet, having eaten baked salmon and veggies for dinner last night (and no wine) I do feel more energetic this morning.
The most common symptom I’m facing at the moment is stinging in my elbows and knees.  I know it sounds ridiculous but it’s the inside soft tissue of the bend not the bone that stings when I lie down, like it’s been wrapped up tightly and let go but the feeling stays constantly making it hard to sleep.  I watched Peter Greste (the Australian journalist imprisoned in Egypt for over 400 days)  on Q&A last night and he spoke at length about how much stronger he found out he was than he thought, and if anyone had told him he’d be jailed for over a year, he’d have wanted to go mad.  But he didn’t and he says we are all much, much stronger than we think.  I hope he’s right.  I felt buoyed by the possibility that he is. 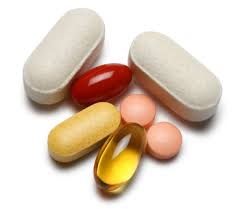 One thought on “Phase 2: Vitamins”